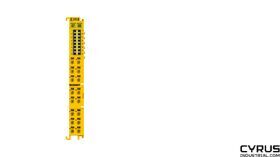 The EL1918 TwinSAFE component is a digital input terminal for sensors with potential-free contacts for 24 V DC. The EtherCAT terminal has eight fail-safe inputs, which are transmitted via FSoE to a TwinSAFE Logic-capable component.

The EL1918 has safety parameters to specifically adapt the functionality to the respective safety requirements. Thus, for example, test pulses can be configured with fine granularity for all eight channels in order to be able to connect as many types of sensors as possible.

A further highlight of the EL1918 is the integration of the functionality of the EL6910 TwinSAFE Logic. The EL1918 can also be used as a safety controller at any time. In the default case, the EL1918 is a simple input terminal, whose input signals are transmitted via FSoE to a TwinSAFE Logic-capable component. It can be used directly as a safety controller in order to process input signals directly in the terminal so as to forward only accumulated information to a TwinSAFE Logic, or a complete safety application can be implemented on the EL1918. The range of functions corresponds to that of the EL6910. The only difference is the limitation of the number of possible safe connections to 128. Apart from that, all the advantages of the new generation of safety controllers can be used (see EL6910 customizing, incremental download, analog value processing, etc.).

As soon as the price of the products decreases, you will immediately know about it.
Keep track of price reductions

The price has not changed yet. We will show it on this chart once it changes